SignalWire Video APIs allow you to host real-time video calls and video conferences on your website or app. The following demo is a very simple application that will help you get started and embed video. The demo will:

We will use server-side Python and client-side Javascript to build an interactive application that can handle calls with multiple users with ease.

Below is a screenshot of the moderator view. Notice the controls on the left and at the bottom of the screen: 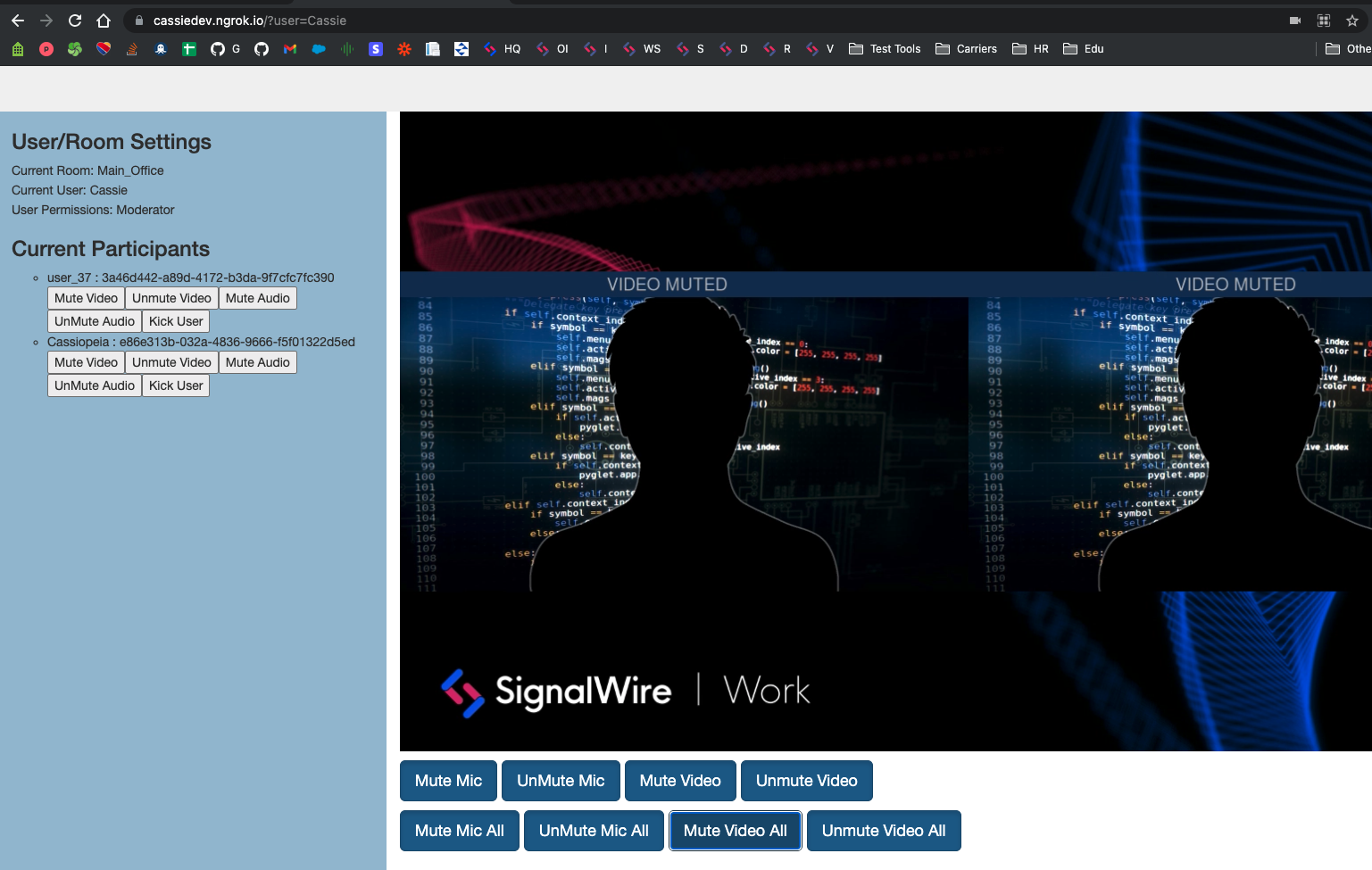 Below is a screenshot of the guest view: 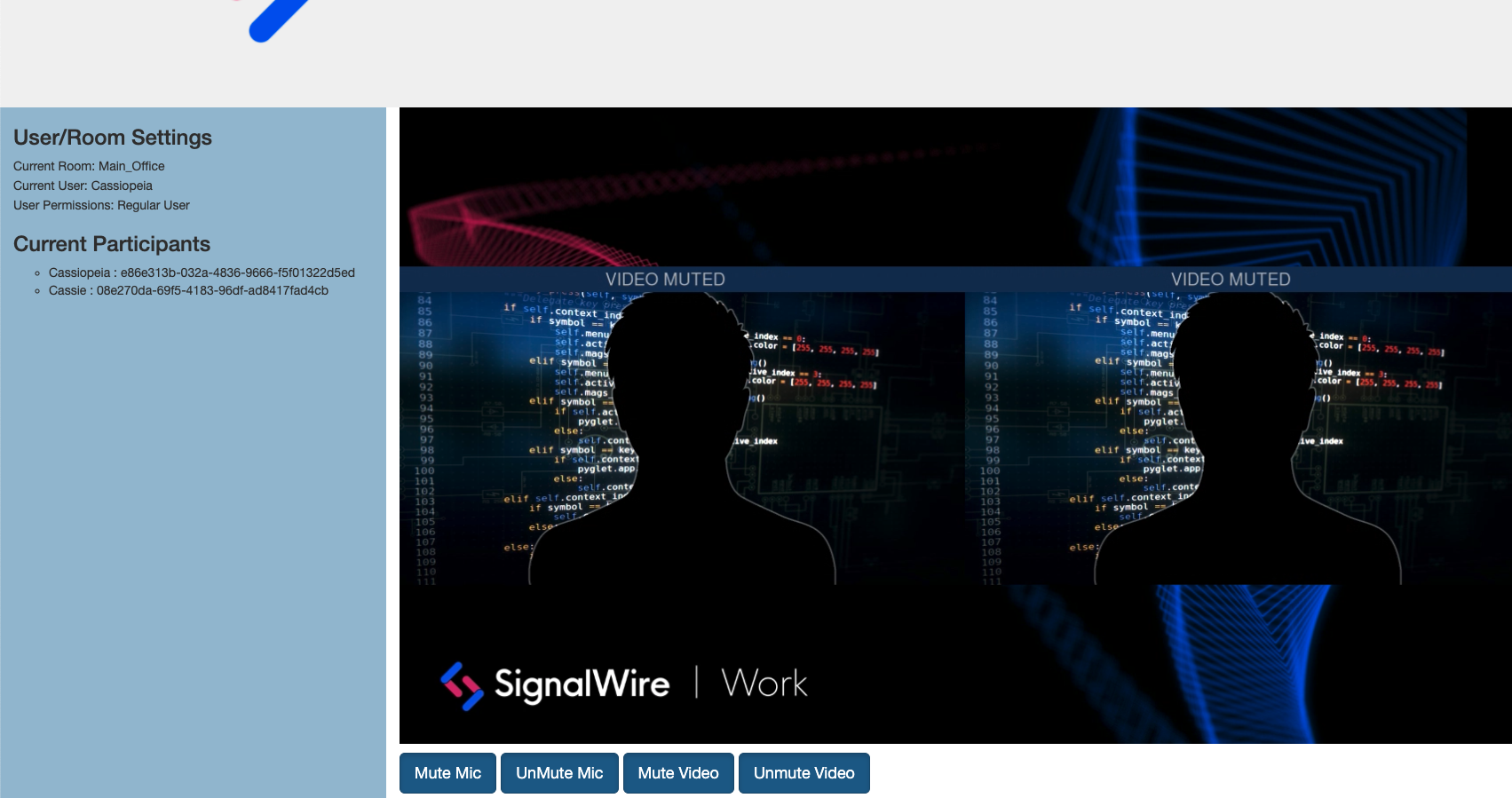 The application needs a SignalWire API token. You can sign up here, then update the .env file with the Project ID as SIGNALWIRE_PROJECT_KEY, Auth Token as SIGNALWIRE_TOKEN, and SignalWire Space URL as SIGNALWIRE_SPACE. You can see an example of this in the script below with made-up values. Alternatively, you can set your environment variables on the console and access them via import OS.

Setting up the server-side code

The server-side code will do most of the heavy lifting; within this file you will need functions for handling HTTP requests, creating rooms, and creating tokens. You will also need two flask routes that will handle requests to create a ‘guest token’ and to create a ‘moderator token’.

The create token endpoint will return a JWT token that is used by the front end application to identify what actions you are allowed to perform. When a token is created, the most important parameter required is permissions that define what each user is allowed to do. For example, if you gave a user no permission at all, they would be unable to mute or unmute their own audio/video.

In this example, we will need 3 functions:

Our first function will define what happens when a token with guest permissions is requested. We will create a dictionary called payload with keys room_name and user_name. Both of these values can be passed through the URL as query params, but if user is not specified as a query parameter, it will be randomized. We also need to create an array that will contain permissions to control only one's own video/audio. We will add a dictionary key of permissions and set it equal to our permissions array. Next, we will set result equal to the result of our function handle_http() with the arguments payload, which has our room name, user name, and permissions, and room_tokens, which is the correct endpoint for creating a token.

Our third function will be responsible for creating the room when called and it's very simple!

We will create a dictionary called payload just like the previous functions. This dictionary will have keys name, display_name, max_participants. We will then return the result of our handle_http() method with arguments payload as the payload and rooms as the endpoint for creating a room.

Next, we need to define our two routes for moderator and guest users.

Let's start with the moderator route. We will begin by setting the defaultRoom for instances when a custom room is not chosen. We will also set the userType to a moderator. However, we don't want users not having options for customization! We will accept query params for room and user to allow for specific rooms and users to be chosen.

An example of how this would look is https://localhost?room=Reception?user=Receptionist. We will then call our createRoom() function in order to create the room. Next, we will assign the value of running our function request_moderator_token() with arguments room and user that were defined earlier in the function to moderatorToken. Now we will render the bootstrap template with our values for room, user, token, space, userType, and logo.

The guest route This will be identical to the route above except that we will call the request_guest_token() function instead and set userType to something other than Moderator to indicate that this user does not have full permissions. In this example, I will use Regular User. You will also need to pass the guest.html file as the variable instead of mod.html.

Configuring the client side code

Now that we have created a room and assigned tokens, we need to control what the user sees when they join the room! There are two different files that contain Bootstrap templates for what the layout should look like and Javascript to control how the user can interact with the page. The guest.html view does not include any buttons for moderator controls, such as ‘Mute All Users’ or ‘Remove a Participant’. It will only contain the buttons to mute and unmute a participant’s own individual audio/video. The mod.html file represents what a moderator sees, so they will have the buttons to control each user as well as themselves.

See the mod.html or guest.html file for the full code. You are free to change the layout to anything you'd like.

To summarize, we simply pass the id of the HTML element where we want the SDK to place the video in rootElementId. In our case, our element is named rootElement and we are passing it to rootElementId. Host and token will point to the host and token variables passed through the Bootstrap template in our previously defined guest and moderator route.

Here you can see that audio and video are both set to true. This is what determines the application will be connecting with both audio and video. If you wanted to create an audio-only application (like a clubhouse style app), you could set the video here to “false” and you would use the audio track only.

The last noteworthy part of the javascript code is the steps that are taken when a room is joined (and when a member joins/leaves). The full code can be found in either mod.html or guest.html; below is a display of what happens when a room is joined. The same concept is true for when a member joins/leaves except that it is not necessary to indicate the specific user as there is only one in the params.room object at that time.

The SDK emits events to let the client know about various salient changes (like when a participant joins or leaves or when a participant's state changes as in their video is muted or unmuted). You can see an example of how we get the events here:

What this results in is the following:

Again, the code is nearly exactly the same when members join or leave except that there is only one member in params.room.member so the code would instead look like this: 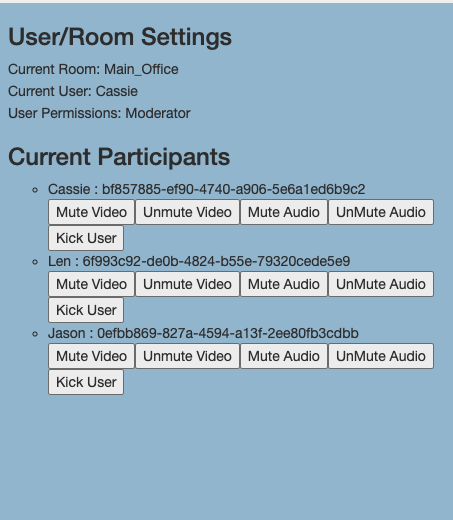 Below is an abridged version with the main points. Here we will go through the participants one by one and list them as an HTML element. In the nav bar (or wherever you'd like participants to be displayed), we need to create a <li> element with an id equal to "app". In listParticipants(), we will start by creating a ul element called list and selecting the <li> element with id app set to the variable app. We will set app.textContent to an empty string to make sure that every time it is called, the original list is cleared.

We will loop through our array of participant objects and create a <li> element with text content equal to a string like "UserName : User ID" for each user. We will also add buttons for each moderator function (only videoMute shown below). We can make the button functional by setting the .onclick event equal to the function we defined earlier, videoMuteMember(id) with the participants userID as the id argument. This same process can be repeated for all the other buttons. We then append to list the li element with username and user ID and the buttons to mute/unmute that user, in that order. Lastly, outside of the forEach loop we will append list to app, which will make it appear on our nav bar.

How to Control the Video/Audio of Other Users

In the moderator view, we have several functions for controlling other users shown below. These will take a member ID (gathered from room.params on room state changes) as the argument and contain the methods shown in the documentation for muting/unmuting/kicking out a user. These will not work if the token does not have the correct permission defined. These will be attached as on click events to buttons that are next to each user on the nav bar only if you are in the moderator view.

How to use the application

To share it with others, host it on a server or use an SSH tunnel along with the appropriate route for who you are sharing it with. For this script, you could use a ngrok URL and either the default moderator route, like this http://f0032dfdshhdsfkh7.ngrok.io?user=Cassie or the guest route, like this http://f0032dfdshhdsfkh7.ngrok.io/guest?user=Cassie.

Check out the full code on our SignalWire Github Repo!